History of the Village Hall

The book, which can be purchased from Kibworth Post Office, covers the time of the 1780 Enclosure Act to the mid 1900s - probably the time of the greatest historical change in the three villages.

The following extract is reproduced with the kind permission of the author:

"...as we head for Debdale Lane, stands the National School, which, when it opened in 1862 catered for 88 children.

The ground where the National School stands (now the village hall) was originally sold in September 1834 to build an Arminian Methodist Chapel, this though, only lasted a few years for a Calvinistic Chapel was opened there in May 1857, and that had closed by 1861, for in May of that year the Rev. Fawssett purchased 320 sq. yds. of land and buildings on Smeeton Town Street for the use of a school and in a later conveyance he transferred the land and building to the Rector and Churchwardens of Smeeton. It is unclear if the building first erected in 1834 was demolished or converted into the school, although I believe the latter.

In 1927 the senior pupils were transferred to Kibworth, and in 1933 all the remaining pupils, except the infants, were also transferred. By January 1968 the end was near, for it was costing £186 to teach each of the 12 pupils at Smeeton, and only £66 over the rest of the county. The school finally closed in July 1968." 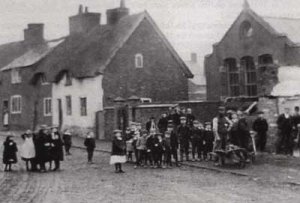